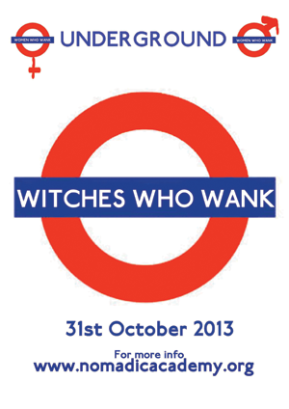 Not entirely aware of what we were going to watch, we fell in to the foyer to discover that it was an improvised show, with the main ‘fool’ intending on gaining inspiration from the audience. Inspiration about wanking from a prude british audience? Would this work?

The lights remained off for the first 10 minutes of the show, I guess to ease us in to the topic. As the lights turned on and our pupils constricted we began to adjust to the unsettling journey we were about to take.  As predicted the audience were rather frosty. It almost felt like trying to get an orgasm from vaginal stimulation alone. As much as Joanne Tremarco the magnificent fool tried to engage in a conjoint stimulus of both the clitoris and the mysterious g spot of the audience, it didn’t seem to warm the cockles.

A wonderful fit of laughter bellowed the room as she danced around performing as, what I can confirm to be an incredible impression of a clitoris. “Fear me, I’m the only organ of the human body designed solely for pleasurrrrre”. An impression I have shared with many a friend since seeing the show.

She not only simply acted the fool, Tremarco also shared obvious wisdom she had on the topic. Playing on the times of Freud and the use of orgasms to cure hysteria. Tremarco certainly knew her g spots. But in an improvised play on a topic so sensitive to some people she certainly didn’t get to really release all that was built up inside of her.

I came away from the performance in a fantastic mood, ready to tell everyone how great it was, however the following morning I woke up in anger.

What a prude, pre-historic audience I was a part of. Towards the end of the performance, Tremarco encouraged us all to get up on stage and start dancing. After much reluctancy we all did. Dancing to the sounds of a violin and a melodica we all began to loosen up slightly. As our nerves began to melt away Tremarco spotted a couple engaging in, what can only be referred to as a very sloppy snog. “LOOK AT THEM SNOGGING! LET’S HAVE A WEDDING.” she screamed. Everybody clapped and cheered and instantly came alive. We shared out roles for the wedding. A lovely short chap offered to be the wedding dress, another the priest. Four women played the part of the bouquet, another the ring and so forth. The neurones of the room were flying, electrified with excitement. I took a glance at Tremarco as she stumbled back to take a seat in the first row of chairs of the audience. Exhausted she allowed the audience to continue the performance of the ceremony. We needed no guidance or push to reach this height of pleasure by no means. As expected us Brits know how to celebrate a marriage. We revel in it. We engage in it. We FUCKING LOVE IT. But no it’s not just weddings, it’s anything in the heterosexual world of love, sex and marriage. Keep it clean and keep it hetro. Cheer on the men that are trying their best to please their ladies, by rotating that clitoris the wrong way. Ignore and BOO the women who are cutting out the middle man, and who have got that clockwork finger motion down to a tee, because we obviously don’t want to hear about it.

We witnessed a daring fool try and engage people in an act that I for one try and enjoy at least once a day. An act I’m sure most of the audience were very familiar with, but they didn’t want to know. We threw her ambition and courage of discussing such an important topic right back in her face, and covered it with a sprinkling of hetrosexual sex sprinkles.

I want to apologize for my reluctancy to get more involved in the subject, I even surprised myself with my hesitance. I mean I walk in to my housemates room every god damn morning screaming “ARE YOU HAVING A WANK”. I can only applaud Tremarco for her efforts, an excellent, courageous performing fool. I only hope that some other audience can fill the gaps that Bristol were so reluctant to fill.

One thought on “Witches who wank.”